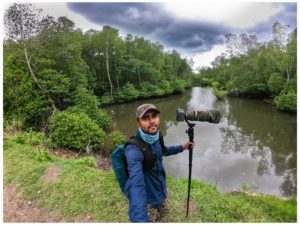 Shakti : Born and brought up in the Andaman islands, Shakti was inclined towards nature and wildlife since the day his mother allowed him to watch TV. He grew up watching Discovery Channel and decided to pursue his passion. He did his post-graduation in Marine Biology and worked as a Marine Biologist for 5 years, scuba diving in the remotest island in the Andaman, Nicobar and Lakshadweep archipelago conducting underwater surveys to study coral reef biodiversity prior to starting Tribesmen in 2018.

Having bittern by the birding bug courtesy to his friend and colleague in 2013, his passion for birding slowly grew into what he is today, a person who sleeps with one field guide next to his pillow and another under his bed . Shakti considers himself a mix of of birder and a Bird photographer. He spends hours studying and observing birds, their behavior on field as well as learning to be a better wildlife photographer and constantly improving his wildlife images. He has traveled much across the country often in his motorcycle Spotting over 650 species of Indian Birds in the process remarkable if you consider that he lives in an island far far from mainland India.

BENEFITS OF TRAVELLING WITH HIM:

A birding trip with him can ensure you tick all the birds from your Andaman wish list and if you are a bird photographer than his “we don’t take record shots” attitude will help you get the desired images. His tours are meticulously planned and his knowledge about the islands, the ecosystem and wildlife makes him a ideal candidate to lead the Birding Tour.

search us on google for more reviews.

Wonderful experience ......For me the most memorable wildlife tour. Me and my friend Dr.Parag Nalawade able to photograph Ruddy Kingfisher at shoal bay in south Andaman Islands to complete all 12 Kingfishers of India ,for us it was unforgettable moment. Mr.Shakti Vel... what a person he is! Planning, dedication on field, knowledge about species,photographic views..everything is remarkable. I will love to visit Andaman again with him. I am very much thankful to you..Mr.Shakti.Looking forward your cooperation in future.
Ashirwad Thakoor
Maharastra,India
In mid november 2019 we had three days of private guiding in Andaman in search of the endemics and other birds of interest. We stayed at the AT Villas hotel at the outskirts of Port Blair, a hotel often used by them. The birding was intensive from early mornings to late afternoons (about three hours lunch break at the hotel) in order to get also the nocturnals like the Andaman nightjar and the five owl species on the island (four endemic). The habitats were varied from wetlands to mangroves and forests. Our guide was excellent in both bird spotting, organizing and handling us as clients. He was both very professional and also very nice as well. The guide managed to find all 20 endemics, 18 of them we saw and two of them only heard (Andaman Wood pigeon and Andaman scops owl). The total list of bird species seen during the three days was 107 which met and even exceeded our expectations. The hotel we stayed in was affordable with very spacious and nice rooms. The restaurant served good Indian food and the packed breakfast was OK. All in all an outstanding and highly recommendable birding experience!
Runar Mauritzen
Molde, Norway
This was my first birding trip to Andaman and Nicobar Islands. I had been following Shakti on Instagram for sometime and was mighty impressed by his images and knowledge about the feathered friends. Though I could only spend one and a half day with him, but it was worth every minute of it. And it made me want more. Shakti, is a One Stop for birding in these beautiful Islands. He has immense knowledge about the birds, their behaviour, characteristics and knows exact spots of theirs. He is smart, humble and talented as also concerned citizen as far as conservation and cleanliness is concerned. It was truly an honour to have Shakti as my guide and naturalist during my trip. Shakti, I will be back for more and very soon. All the best and sincere gratitude for your time.
Col. Kehar Singh
Uttar Pradesh, India
Shakti is as good a guide as he is a person. Very hard working, knows his terrain in and out and a great spotter. He is young in age and very enthusiastic, but if you can keep upto his pace - the rewards will be commensurate.

"Read the Andaman trip report in link below"
https://highwayodyssey.blogspot.com/2019/01/bird-watching-in-andaman.html
Sumeet Mukherjee
Telangana, India
We use cookies on our website to give you the most relevant experience by remembering your preferences and repeat visits. By clicking “Accept All”, you consent to the use of ALL the cookies. However, you may visit "Cookie Settings" to provide a controlled consent.
Cookie SettingsAccept All
Manage consent

This website uses cookies to improve your experience while you navigate through the website. Out of these cookies, the cookies that are categorized as necessary are stored on your browser as they are essential for the working of basic functionalities of the website. We also use third-party cookies that help us analyze and understand how you use this website. These cookies will be stored in your browser only with your consent. You also have the option to opt-out of these cookies. But opting out of some of these cookies may have an effect on your browsing experience.
Necessary Always Enabled
Necessary cookies are absolutely essential for the website to function properly. This category only includes cookies that ensures basic functionalities and security features of the website. These cookies do not store any personal information.
Non-necessary
Any cookies that may not be particularly necessary for the website to function and is used specifically to collect user personal data via analytics, ads, other embedded contents are termed as non-necessary cookies. It is mandatory to procure user consent prior to running these cookies on your website.
SAVE & ACCEPT